What is gradient descent?

Gradient descent is an optimization technique that finds the values of coefficients of function (f) and minimizes the cost function. It finds the best parameter/coefficient when it is not possible to solve the problem analytically.

Just imagine you are taking part in treasure hunt competition and the treasure is exactly in the bottom of a hemisphere shaped pool. In order to win treasure, you need to dive deep and reach the bottom of pool

Here the pool is the function (f). Any participants who move randomly and try to find treasure on the surface of the water will never win the competition and the participant who dives deep and reach the bottom is the winner.

So participants who are moving randomly are the cost of the current value of coefficients. And the winner is at the bottom which has the best set of coefficients (minimum of function)

So here the goal is to reach a “winning point” that is to evaluate coefficients until they reach “lower” cost.

Thus in machine learning algorithms, we need to repeat this process that will lead you to the bottom of the hemisphere object and have the best values of coefficients at minimum cost. 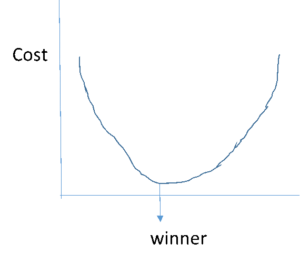 Gradient descent starts by assigning 0 or any small random number for initial values of the function.

The loss function is calculated by computing the errors of all training samples. Thus derivative of cost is calculated to find the slope of the function so that we know the direction to move the coefficient values in order to get lower cost on the next iteration. For example Actual value is 1 and predicted value is 0 so loss/error/derivative = Predicted – Actual = 0-1 = -1

A Cost function basically tells us ‘how good’ our model is at making predictions for a given value of slope and intercept.

Let’s say, there are a total of ’N’ points in the dataset and for all those ’N’ data points we want to minimize the error/loss. So the Cost function would be the total squared error i.e

The squared difference makes it easier to derive a regression line. To find the regression line we need to compute the first derivative of the Cost function, and it is much harder to compute the derivative of absolute values than squared values. Also, the squared differences increase the error distance, thus, making the bad predictions more pronounced than the good ones.

Thus, the goal of any Machine learning algorithm is to minimize cost function with optimum learning rate to lower error between actual and predicted values gives the best slope and coefficient values, which signifies that the job is well done.

The goal of all supervised machine learning algorithms is to best estimate a target function (f) that maps input data (X) onto output variables (Y ). This describes all classification and regression problems. The different algorithm has different coefficients and its goal is to optimize coefficients that can result in the best estimate of the target function. Common examples of supervised machine learning algorithms are linear regression and logistic regression.

The difference between batch and stochastic gradient descent is, it updates coefficients at each training data point, and thus processing could be slow if we work on large data sets.

The update procedure for the coeﬃcients is the same as that above, except the cost is not summed or averaged over all training patterns, but instead calculated for one training pattern. The learning can be much faster with stochastic gradient descent for very large training datasets and often you only need a small number of passes through the dataset to reach a good or good enough set of coeﬃcients, e.g. 1-to-10 passes through the dataset.

This website uses cookies to improve your experience while you navigate through the website. Out of these, the cookies that are categorized as necessary are stored on your browser as they are essential for the working of basic functionalities of the website. We also use third-party cookies that help us analyze and understand how you use this website. These cookies will be stored in your browser only with your consent. You also have the option to opt-out of these cookies. But opting out of some of these cookies may affect your browsing experience.
Necessary Always Enabled
Necessary cookies are absolutely essential for the website to function properly. This category only includes cookies that ensures basic functionalities and security features of the website. These cookies do not store any personal information.
Non-necessary
Any cookies that may not be particularly necessary for the website to function and is used specifically to collect user personal data via analytics, ads, other embedded contents are termed as non-necessary cookies. It is mandatory to procure user consent prior to running these cookies on your website.
SAVE & ACCEPT