Good judgment, intuition, and an awareness of the state of the economy may give a manager a rough idea or feeling of what is likely to happen in the future. However, converting this feeling into a number that can help to predict sales, raw materials, etc. is difficult.

A time series is a set of observations of a variable measured at successive points in times or over successive periods of time. Time series forecasting could be possible if the following condition is satisfied:

In a time series, time is often the independent variable and the goal is usually to make a forecast for the future.

The pattern/behavior of the data in time series has several components. The following are 4 components.

It is the most important characteristic of the time series. A time series is said to be stationary if covariance does not change over time that is it has constant mean and variance.

The mean and variance do not vary over time.

Ideally, we want to have a stationary time series for modeling. Of course, not all of them are stationary, but we can make different transformations to make them stationary.

There are many ways to model a time series to make predictions. Here, I will present:

These techniques are useful for irregular pattern

Moving Averages
It uses an average of most recent n data values in the time series as the forecast for the next period that is the next observation is the mean of all past observations.

Let us understand this with an example.

Suppose we have the following data. 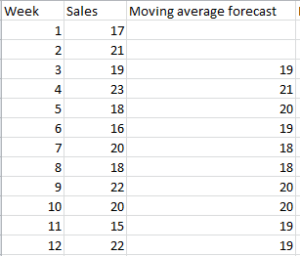 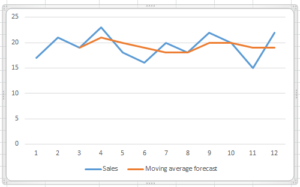 Now let us do a forecast in python 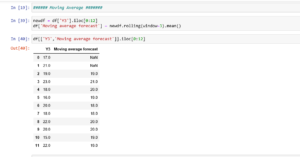 Mathematically it is expressed as:

y = forecast of the time series for period t

Alpha (a) = smoothing constant between 0 and 1

Let us take the same example.

Thus, the following are the final calculations

Here is the link to my GitHub repo: https://github.com/VruttiTanna/Time-series-forecasting/tree/main

This website uses cookies to improve your experience while you navigate through the website. Out of these, the cookies that are categorized as necessary are stored on your browser as they are essential for the working of basic functionalities of the website. We also use third-party cookies that help us analyze and understand how you use this website. These cookies will be stored in your browser only with your consent. You also have the option to opt-out of these cookies. But opting out of some of these cookies may affect your browsing experience.
Necessary Always Enabled
Necessary cookies are absolutely essential for the website to function properly. This category only includes cookies that ensures basic functionalities and security features of the website. These cookies do not store any personal information.
Non-necessary
Any cookies that may not be particularly necessary for the website to function and is used specifically to collect user personal data via analytics, ads, other embedded contents are termed as non-necessary cookies. It is mandatory to procure user consent prior to running these cookies on your website.
SAVE & ACCEPT